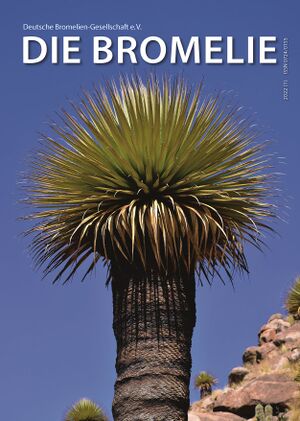 The DBG offers a variety of publications on bromeliads to its subscribing members.

After the society was founded in 1970 the first articles on bromeliad related topics were published in on a very small and humble scale. First in the magazine "Der Palmengarten" of the Palmengarten in Frankfurt am Main, Germany, until in 1974 the first own publication called "Rundschreiben" (= circular letter) were released. All issues are meanwhile digitized and can be downloaded for free. Please note that they are all written in german language only.

The most important publication of the DBG beyond doubt is the journal "DIE BROMELIE" (= the bromeliad). The first periodical issue was published in 1980 under the title "DIE BROMELIEN" (= the bromeliads), in 1981 the name changed once again to "DIE BROMELIE". Each of the three to four issues per year contains travelogues, reports on new described species, exhibitions, cultivation topics and more. As the society grew so did the magazine. Quality and quantity increased and a lot of new authors joined us over the years. The latest radical change came in 2011: the paper format was changed to a bigger one and the editors are aimed to release all articles bilingually (german and english) to meet the fact of more and more international members. All issues are listed in this category. Available back issues are gathered in this category and can be reordered through our DBG-Office. Older, out of stock issues can be downloaded for free. Please note that most of the older magazines are written in german language only.

The "Special editions" (german: Sonderhefte) are focused on certain topics. Either on funded protection projects or reworks on specific complexes of species. The most recent special edition, written by Mrs. Renate Ehlers from Germany, is dealing with the very diverse group of the green-blooming, small, grey Tillandsias from Mexico, including original descriptions of a lot of new species and varieties.

Some back issues of "DIE BROMELIE" and it's special editions can be reordered through the DBG-Office. All available issues are listed in this category. Whether a single issue or special edition is available or not is also noted in it's corresponding article.